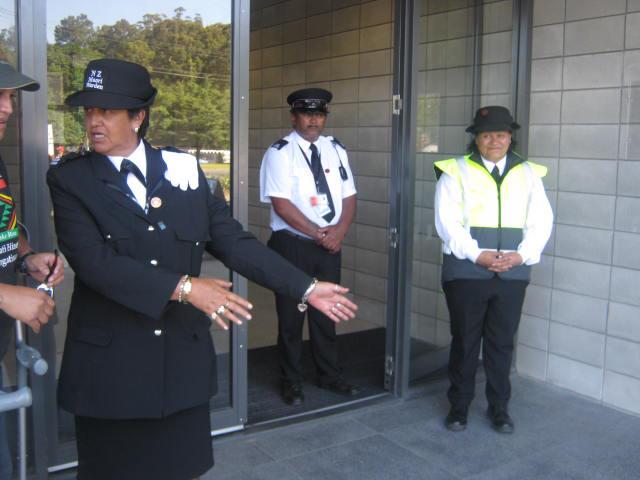 The Auckland Māori consultation hui on state asset sales took place yesterday at Tainui’s Airport Novotel under heavy police and Māori warden presence. The hui revealed universal dissatisfaction from Māori about the government’s plans, but also exposed important class divisions within Māoridom itself.
In his opening presentation, Minister for SOEs Tony Ryall stated that the controversial Section 9 will stay in the SOE Act, and that the government had “got the message on that.” Section 9 provides that “nothing in this Act shall permit the Crown to act in a manner that is inconsistent with the principles of the Treaty of Waitangi.” Whilst the audience made it clear that Section 9 should also apply to the new legislation enabling partial sell-offs of state assets, the debate that followed rapidly broke out of the bureaucratic parameters that the government had laid down for the hui.
A Mana Movement member asked Ryall what guarantees that, after these sell-offs, the government wouldn’t sell more. His response was that the government only had a mandate to sell a 49% stake in each of the power companies, and the rest of its stake in Air New Zealand. The questioner replied that they were already privatising further by selling off state housing in her neighbourhood of Glen Innes. Ryall reiterated that the general election had given them a mandate, whereupon a Workers Party member interjected that “one million non-voters is not a mandate!” 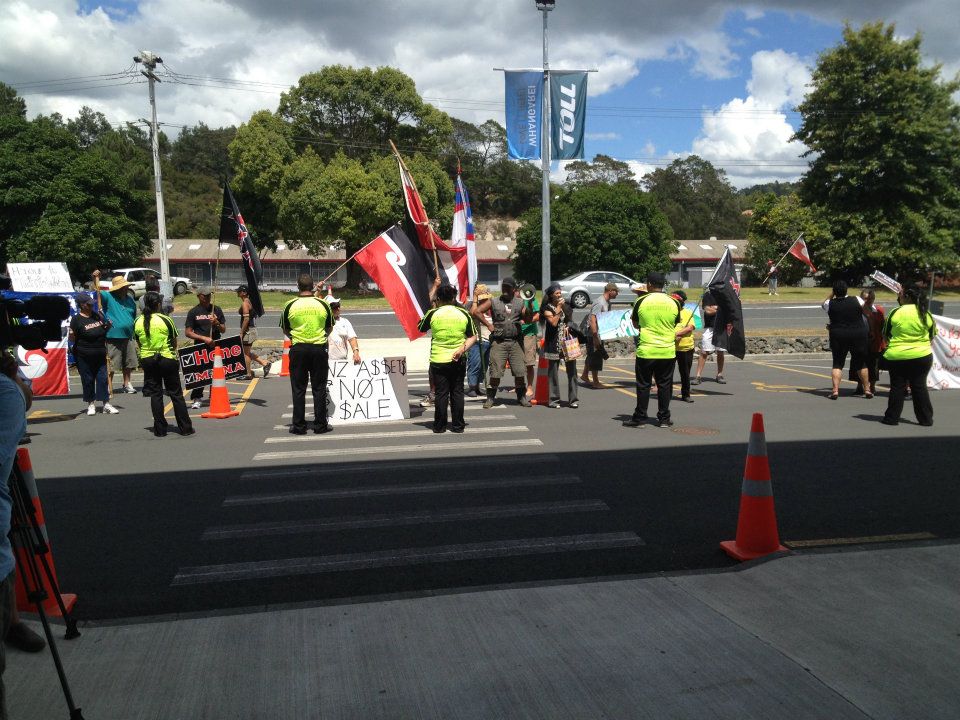 Another questioner put it to the minister that many people, especially tāngata hauā (disabled people) live far below the poverty line and would never be able to buy shares, further disenfranchising them. Similarly, Joe Carolan, speaking on behalf of the newly-formed “Aotearoa not for sale” group, asked how the low paid Unite union members working at the airport could ever become one of the so-called “mum and dad investors”. Ryall’s answer was that they could benefit from asset sales through their KiwiSaver investments. A large chorus in the audience responded with: “they can’t afford KiwiSaver!”
A speaker from the Māori council stated that since the genesis of the existence of the energy companies was water, it is necessary to determine who has rights to water before any sell-off. Claiming that the Māori Council represents hapū, he appeared to take a sideswipe at the Brown Table with the comment that “it was hapū that got off the waka, not Iwi Leaders Forum.” He concluded by saying that the Sealords deal was an excellent model (where iwi got 20% of the fish and a share of the fishing rights). The government has stated that it “considers interests in water to be beyond the scope of this consultation.” The Māori Council has lodged a claim with the Waitangi Tribunal for control of fresh water which, if successful, could lead to consumers having to pay for it.
Another speaker identifying himself as a Manurewa resident said that the experience of the privatised Contact Energy pointed to a future where the energy companies would be robbing the government and taxpayers. Noting how Pike River Coal is coming out of the enquiry looking like a bad employer, he asked why – since the clauses relating to being a good employer and social responsibility are to be removed from the new legislation – would the companies continue to act according to those principles. Ryall’s blithe reply was: “I think you’ll find that they will.”
Emerging from the hui a few things are obvious: there is widespread dissatisfaction with the SOE sales amongst Māori. Some oppose the sell-off outright, whereas others just want to know “what percentage of the private shares will Māori collectively own?” For the campaign against the sell-off, how the question is framed is vital. As Ryall correctly pointed out: “under both governments, SOEs have been driving at profit,” and energy prices are already high. Therefore we must fight privatisation in the name of a positive alternative – workers’ and users’ democratic control of public utilities.