[youtube=http://www.youtube.com/watch?v=x3NN6tlkesE]
About 50 protesters from Wellington’s Queer Avengers lobby group picketed the offices of The Dominion Post at lunchtime levelling charges of transphobia at the paper, its parent company Fairfax and the wider media.
The controversy arose yesterday when veteran Dominion Post columnist Rosemary McLeod published an opinion piece entitled Why I feel for the kids of ego trippers.
The column dealt with the issue of transgender parent Thomas Beatie who has given birth and appeared on television shows and in numerous media reports as a result.
Protester Sara Fraser said McLeod’s column was “appalling” and was part of a transphobic trend in the New Zealand media.
“She claimed not to know anything about the topic but still wrote about it.”
Ms Fraser said of particular concern was the use of the split pronoun he/she that McLeod used to refer to Beatie.
She said the over-riding issue was the column made transgender people look like unfit parents.
“Rosemary needs to wake up and smell the 21st century – such hatred is not acceptable in this day and age.”
Skye Shaddix, a 17-year-old female-to-male transgender person, said there was no reason why “trans-people should not be allowed to have kids.”
Shaddix and his 19-year-old boyfriend –  also female-to-male transgender – were considering having children in their late 20s.
“We should not be judged on how we were born – we have the working body parts, so why can’t we have the kids?”
The protesters gathered outside The Dominion Post‘s Boulcott St offices in downtown Wellington carrying placards bearing slogans like “transphobia is bullshit” and chanting “hey hey, ho ho transphobia’s got to go” and  “we’re here, we’re queer, we’re fabulous, don’t f#$k with us.”
Speakers at the protest said the media was profiting from racism, bigotry, homophobia and transphobia.
Queer Avengers’ Brooklyne Kennedy called McLeod’s column the “asinine rhetoric of the past” to cheers from the other protesters.
The group proposed a one day boycott of Fairfax’s Stuff website before going into the ground floor lobby of The Dominion Post to deliver a letter to management.
Dominion Post editor Bernadette Courtney said the column was carried on dompost.co.nz, and in print, in sections clearly  identified as opinion or comment.
“The piece represents Ms McLeod’s opinion and, while I accept that not everyone would agree with it, and may even have been affronted by it, I believe that when balanced against the principle of free expression, it would have been going a step too far to have banned it,” Ms Courtney said. [ed note: private newspapers select what to print and what not to print.]
– © Fairfax NZ News 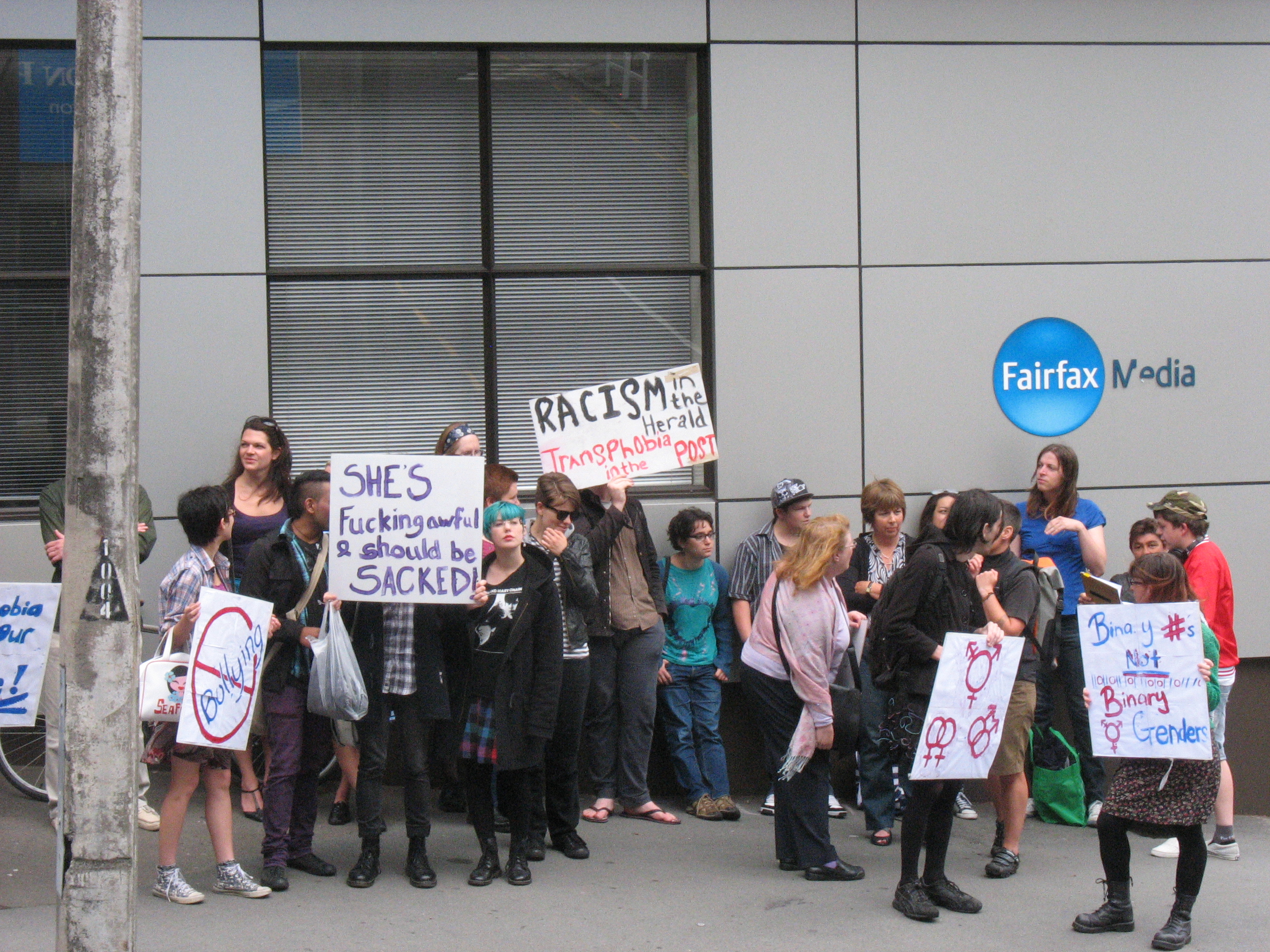