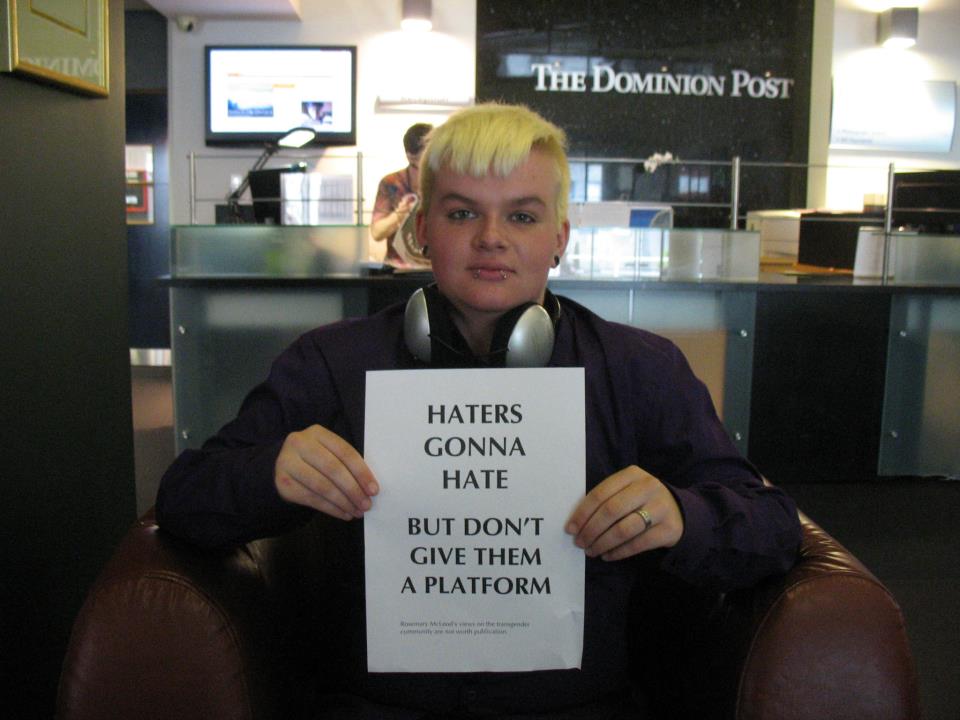 As a result of Friday’s action against media transphobia, members of the Queer Avengers (and friends) were offered an editorial to counter Rosemary McLeod’s. This piece was co-written by Ian Anderson and Rosie-Jimson Healey.
EGO-TRIP: compound noun, informal. An activity done in order to increase one’s sense of self-importance.
One would think that giving birth is an activity unlikely to be deposited scathingly in the ego-trip category.
Perhaps bringing a new life into the world does increase one’s sense of self-importance; it is an astonishing example of the power of the human body when a perfect tiny human emerges from a uterus that has casually grown to 500 times its usual size.
Not to mention the presentation of a helpless, beetroot-coloured miniature human being. Even so, we don’t imagine many would link the term “ego-trip” to this particular moment in most parents lives.
However, this was the case in Rosemary McLeod’s piece that bore the headline Why I feel sorry for the children of ego-trippers (February 23). An innocent enough title, certainly not one that would sound immediate alarm bells in the reproductive rights, hate speech and eugenics departments.
Unfortunately, the “ego-trippers’ in question were trans-parents, and alarm bells did ring, loud and clear.

Deriding several trans man fathers who had given birth, McLeod singled out American Thomas Beatie, calling him an “apparent man”, before crudely demolishing his identification and legal status as male, entirely because he did not choose to have a “surgically created penis thingy”.
The problem here is not the piece itself, nor the individual author, but the underlying attitudes that mock and molest people’s rights to say and be who they are, and safely live their lives.
These are attitudes that transgender people and their families and friends live with when they go to work, school, do their grocery shopping, go to school interviews, or pick up a paper.
We’re sure we’ve come a long way from the old belief that a penis makes a man, and a womb a woman. We think it’s fair to say that if a woman had a hysterectomy, or a man suffered the loss of his genitalia, we would not revert to the opposite pronouns. In fact, we probably wouldn’t know.
Then there’s the age-old argument: “It’s the kids I worry about.” Don’t we all. What with environmental concerns, child poverty, the economy, bullying in schools, and most heartbreakingly, New Zealand’s high youth suicide rates, especially among gay, lesbian and gender diverse students, there’s plenty to worry about.
An article published in The Dominion Post on the same day, Gender non-conformity linked to abuse, highlights a recent US study. This found something the trans and gender variant community know perfectly well: children who do not conform to gender norms are targeted for abuse, which can lead to post-traumatic stress disorder.
Although there are no statistics available for trans kids in New Zealand, 20 per cent of lesbian, gay and bisexual kids attempt suicide – compared with 4 per cent of straight ones.
Spokespeople for The Dominion Post state the article was McLeod’s “opinion”, and that refusing the article would violate “the principle of free expression”. However, papers decide what to print, and what not to print. Editors decide what content to let through, whether on the basis of personal opinion – or what will get website traffic and advertising dollars.


This continues a pattern of media profiting from bigotry. Whether it’s Paul Holmes demonising Maori as “bludgers”, McLeod attacking sex-workers, or in this case attacking trans parents, the press provides a platform where bigotry is acceptable.
This is not confined to the news media; see Libra’s recent transphobic ad campaign, which has since been pulled.
In response to the community outcry incited by this media trend, the Queer Avengers called a rally outside Fairfax headquarters in Wellington to protest against the publication of McLeod’s piece. About 60 people showed with less than 24 hours’ notice.
The queer and trans community have sent a clear message: we will not tolerate the promotion of our abuse in the media, we won’t suffer in silence, and we’re not fighting alone.
Wellingtonians are lucky to have access to several committed trans-friendly groups:
Agender NZ provides support and advocacy throughout New Zealand. agendernz.matrx.co.nz.
Tranzform is a Wellington-based support group for trans/gender-variant youth.gaywellington.org/index.php/transform
The Queer Avengers is an activist group opposing all queerphobia and transphobia. thequeeravengers.org.nz